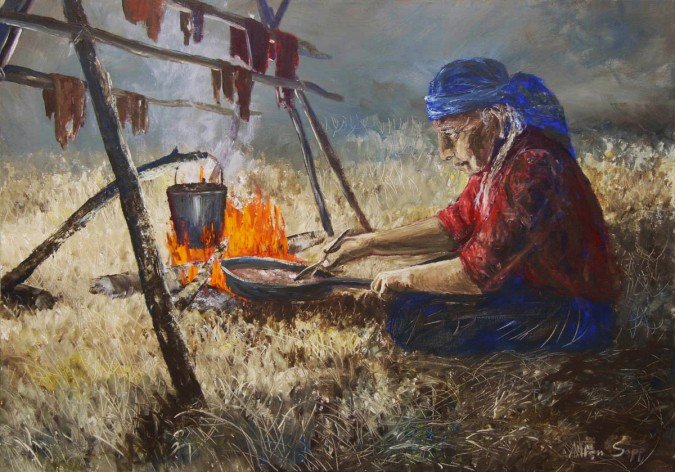 Allen Sapp was born on a cold January night in 1928.  His mother had knelt on the dirt floor of her own mother's cabin on the Red Pheasant Reserve in Saskatchewan.  Maggie Soonias, the now famous grandmother of many Sapp paintings delivered her grandchild.  It was the beginning of a caring and profoundly influential relationship between her and the boy.

At the time Allen was born, his grandfather, Albert Soonias, was a relatively prosperous Cree elder who ran 100 head of cattle, seeded hay and raised wheat.  There was plenty of work available for his son-in-law, Alex, so Allen Sapp's childhood was spent close to his grandparents. 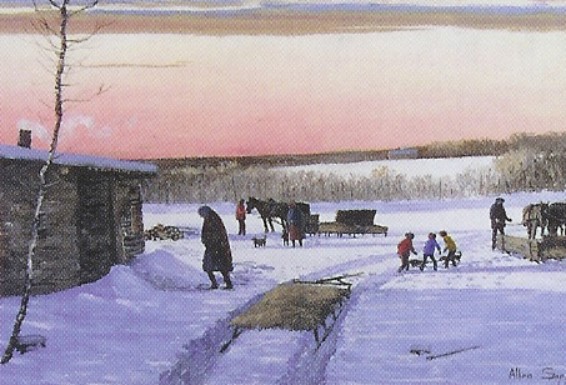 "They All Came to Visit" by Allen Sapp

This was an era when tuberculosis was still rampant and Allen's mother spent many years in a sanitorium.  Allen himself was sickly and the care that his Kokum (grandmother) lavished on him is memorialized in the artist's paintings.

There was a period of time during his eighth year that he was particularly ill.  The nootako (medicine woman) realized that his being had to be given a purpose for continuing in the world.  Up until that point he only had an English name given to him when his birth was registered on the Reserve.  Without a spiritual name (read purpose) the Cree believe that it is difficult for the life force to find reason to remain in the body.  In a dream the nootako had been told that this child should be called Kiskayetum meaning "he perceives it".  The name was bestowed, sweetgrass ceremoniously burned and a pipe solemnly passed from one to another and life continued for Allen. 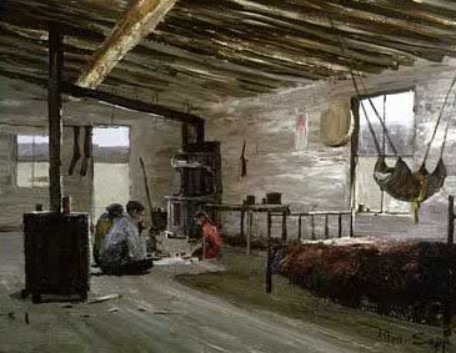 "Inside the House" by Allen Sapp (from the Gonar Collection)

The boy had never been comfortable with the rough and tumble life of other kids.  His school attendance was sporadic and he didn't learn to read or write.  But drawing was a passion.  Using whatever was at hand . . . bits of charcoal, stubs of pencils, wood, bark, leather or scraps of paper . . . Kiskayetum illustrated life around him.

In 1942, after the death of his mother, Allen Sapp married Maggie Paskimin of the Sweetgrass Reserve.  They stayed on at Red Pheasant to care for his grandparents, who because of age had had to sell their cattle and go on relief.  But Allen continued to draw and paint and had a fervent vision of himself as an artist in a white man's world.

But it wasn't until 1961, following the death of the elders that he and his wife moved to North Battleford.

Allen Sapp had no idea how to be a successful artist.  He painted images that he thought white people would like and did his best to sell them door to door.  By chance he met up with Dr. Allan Gonor who encouraged him to paint what he knew best . . . his life on the Red Pheasant Reserve.

Dr. Gonor made a point of learning the business of art and he mentored Allen.  With help from friends he eventually arranged for a one man show at the Mendel Art Gallery in Saskatoon and it was a huge success.

After the Mendel exhibition Allen Sapp began painting so prolifically that Dr. Gonor arranged with businessman William Baker to represent to Galleries and handle all his business matters.  Between 1969 and 1970 Allen had six successful exhibitions . . . not only in Canada but in England and in California.

Allen Sapp's art is a window to life on the reserve as it was when he was growing up in the 1930's and 1940's.  Many of the scenes have disappeared from current reserve life.

Allen Sapp's paintings depict the struggle for survival by a proud people in a harsh environment.

1996-97 - Kiskayetum, an Allen Sapp Retrospective at the Canadian Museum of Civilization Hull, PQ

The point at which First Nations artists gained recognition.