Understanding the Ojibwa Point of View 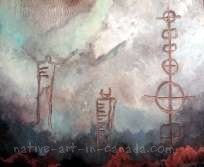 I've noticed that native legends and Indian myths generally show up in storybooks.

Kids can handle this stuff. I learned the myths and legends of the Ojibwa when I was a kid and it made sense to me!

You, on the other hand, may have difficulty understanding the Anishnabe mind if you've unconsciously plunked the notion of manitous, visions and native spirituality into a box called "Children's Literature".

I'm assuming you came to this page because you're curious about native spirituality. What you'll read here is certainly not the ultimate work on the subject...it's only my very personalized accounting of a few of the native legends that I was told as a child.

When I first heard these Indian myths they didn't include illustrative asides. Explanations weren't necessary because they were being told to an Ojibwa child who could hear them. My telling of the stories is full of asides because I'm trying to speak in a way that you can hear.

Before we go much further it might help to have some definitions:

Legend - Webster's says that a legend is a story handed down from the past, which lacks accurate historical evidence but has been, and may still be, popularly accepted as true - the biblical legend of Moses having a conversation with a bush that is on fire, for example.

Myth - The dictionary defines myth as an old traditional story, especially one containing fabulous or supernatural beings, giving expression to the early beliefs, aspirations and perceptions of a people and often serving to explain natural phenomenon, or the origins of a people - the biblical myth of Adam and Eve and the talking snake, for example.

I have heard or read varying versions of the native legends I'm sharing with you here. My explanation for the differences is that before European contact the Ojibwa culture stretched from what we now call Quebec to the headwaters of the Mackenzie River...and from the headwaters of the Mississippi below the Great Lakes as far north as the tree line. It was a vast territory and different regions may have told and interpreted the Ojibwa native legends differently in the same manner that human minds and mouths have fragmented Christian orthodoxy and Muslim traditions. 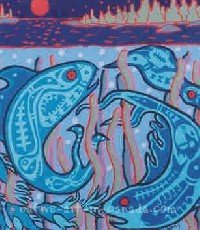 "What's for Lunch" represents the interdependance of all beings.

I've been going on and on here to avoid getting started. I'm feeling at risk. The subject of native legends and Indian stories often rankles my spirit.

Have you noticed that as human beings we always give higher credence to what we believe or think is true over what we secretly label as the mindless drivel vomiting from the mouths of our neighbours? To be neighbourly we don't actually say what we think... but mentally there's a lot of rolling of the eyes and self-satisfied sighs not expressed.

I do it all the time.

Sometimes it's when the two young men in black suits and white shirts smile winningly at me through the screen door. And it happens especially when a little old lady on the street corner, who truly believes that she has the key to my salvation, tries to put a pamphlet in my hand.

How thoughtless of me.

From their point of view, those men and women have only been trying to make a contribution to my life. They thought I was worth the effort.

Without a thank-you, I've crossed the street or turned my back and closed the door.

And here I am - knocking at your door with expectations of my own.

An Elder's thoughts on mainstream perception of the concept of native religion.