Tanning hides is a process of making leather from the skins of animals that otherwise would tend to decompose.

The term comes from the word 'tannin' which is an acidic chemical compound that alters the nature of the protein fibres in the hide in such a way that they resist decay. 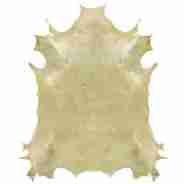 A raw hide ready for fleshing.

In earlier times, tanning hides was an essential skill practiced by First Nations people across this continent. Before woven cloth was introduced by Europeans, animal skins were used for clothing, footwear, shelter and glue. The most common procedure involved soaking in some sort of emollient (oil compound), hours of scraping, and the addition of some sort of preservative or tanning agent. The tanning agents could be found in tree barks or other vegetative sources, but oily mixtures made from animal brains or fish oils were also used as preservatives.

The Best Hides for Tanning

The skins from almost any animal can be tanned, but some skins are distinctly better than others depending on the ultimate application in mind.

Rabbit hide, for example is useless if you are in need of a durable pair of moccasins, but strips of tanned rabbit fur can be woven into a cozy, light weight jacket or added as an adornment to baby clothing or ceremonial regalia. If the edges of the strips are sewn together and then the short strips joined end to end, the fur can be knitted as if it were wool.

The hides from deer, moose and elk are all strong and pliable but none of them make good rugs because the hair falls out too readily. With the hair left on, bear and buffalo make good rugs and blankets.

Even Small Scraps of Hide were Useful

Tanning hides was so much work that a use was found for every little bit of the final product. Scraps of rawhide or even tanned hide were made into long pieces of lacing by starting at an outside edge and cutting in a continuous circle into the middle of the leather. A surprising long strip can be made that way.

Small pieces were often sewn together to make a larger 'cloth' or used for fringe. Mothers also made small toys for their children from scraps of hide.

Leftover leather would often be turned into glue. Tanners would place scraps of hides in a container of water and let them deteriorate for months. The smelly mixture would then be placed over a fire to boil off the water to produce hide glue.

In the 1940's, blizzard conditions forced a famous Canadian bush pilot by the name of Wop May, to land his plane on a frozen lake. The landing was so rough that the plane was toppled and the propeller broke. Fortunately the pilot and his passengers were all bush men and knew how to create a shelter and hunt for food. They were lucky enough to kill a moose and weeks later flew home with the original propeller intact. They had made glue from the moose hide and it was strong enough to withstand the tremendous forces that are put on a rotating propeller.

The process of tanning hides by hand using the animal's brains, is not for the feint of heart.

Moose hide tanning is a traditional practice that is so labor-intensive that fewer and fewer people take the time nowadays to do the work.