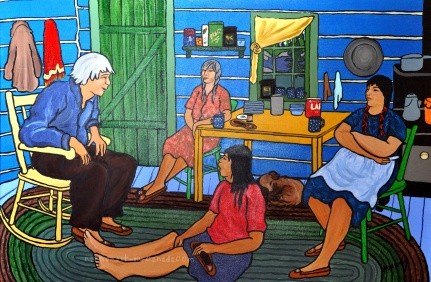 The thing to know about Ojibwa culture...or any culture...is that it can't exist unless the knowledge of its distinctive social characteristics have been passed down from one generation to the next.

A culture is an organic thing.  Whether or not a particular culture lives or dies, depends on what mummy and daddy, grandma and grandpa, auntie and uncle, neighbour and teacher, friend or foe tell the next generation about how the world works and what behaviors are expected of productive adults.

Think of culture as a social outline that's in place before a child is born.

It's a template that defines our consciousness and our learned behaviors.

Take a peek at the picture at the top of this page.  That's me sitting on the floor listening (once again) to my grandfather tell a story.

Now, at the beginning of the twenty first century, much of traditional Ojibwa culture has disappeared. The traditional methods of teaching children have vanished. Parents, grandparents, clans and spiritual guides are no longer the sole contributors to an Ojibwa child's value and belief system.

There's no longer a structure in place that is able to perpetuate the Ojibwa values and the Ojibwa beliefs that pervaded the traditional social order.

Note: When looking for information on the internet about the Ojibwa, people also search for Ojibwe, Ojibway and Chippewa so I alternate between the various spellings. We call ourselves "Anishnabe" so I use that, too.

Those of us who still refer to ourselves as Ojibwa, live within a template defined by mainstream North American culture. Even those of us who live in remote rural areas, where game and foodstuffs are free for the taking, are inclined to hike to the general store for flour, sugar and eggs rather than spend most of our days hunting, fishing and trapping.

And even when we make part of our living in the bush, few of the younger generation can set a snare, construct a fish net, or bring down an animal without a gun...and there is only a handful of elders who could build a birch bark canoe.

But any culture will always exist in a constant state of change. As any teacher knows, the relationship between what is taught and what is learned is not constant. Some information is never absorbed and new knowledge is always presenting itself.

Seventy years ago, as a child, I lived in the bush two hundred miles north of Lake Superior where mainstream Canadians feared to tread. In that part of the world Ojibwa traditions endured, so that with the help of this World Wide Web thing (I could run, but I couldn't hide from the future!!) I'll try to tell you what I know about traditional Ojibwa customs.