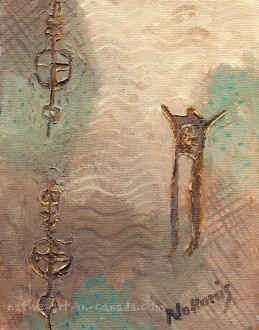 To understand Canadian native art ... or for that matter North American Indian art...it helps to have an appreciation of where it was fashioned, the lifestyle of its maker, the aesthetic values of the society and more than a smidgeon of information about the spiritual beliefs embedded in the culture.

In North America, examples of post-contact First Nations' art have been collected, scrutinized and written about by explorers, fur traders, Christian propagandists and anthropological researchers for 500 years.

If you live in the United States, don't be put off by the "Canadian" moniker....read what I have to say and then try mapping the information onto any section of the continent that most interests you.

The traditional imagery of the prehistoric and early post-contact periods was gradually influenced by European materials, techniques and motifs but it has always been a product of the culture which created it.

Yet from the earliest contact with Europeans to the present day, appreciation of the art has often been disconnected from the cultural character of the tribes in relation to where they lived, the manner in which they eked a living from the land, what they valued most, and how they viewed themselves in relationship to the rest of the universe.

That attitude has resulted in a distorted view of the immense depth, diversity and richness of Canadian native art history.

To understand the potential influence of contemporary Woodland Art, it's worthwhile noting that long before Europeans arrived on the shores of North America, First Nations people, for one reason or another, faced cultural catastrophes and it was often artistic activity that rode to the rescue!

Norval Morrisseau is the grandfather of native art in Canada. His vision of himself and his people created the possibility that native culture and native artists could stand along side the art and culture of mainstream Canadian society.

The name given to the seven native artists who were members of the Indian Professional Artist's Association by Winnipeg Free Press reporter, Gary Scherbain.

The Grandmother of Canadian Native Art.

I was born in the bush north of Lake Superior when the spiritual traditions of the Anishinaabe were still practised and I paint memories of that time of my life.

As galleries and museums began to rethink the definition of First Nation's art more and more native artists saw career possibilities. Here's a small sampling of contemporary native artists listed alphabetically. Not all would be considered woodland artists, some like Allen Sapp and Gerald Tailfeathers developed their careers independently.