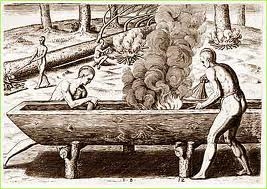 Indian canoes evolved from dugout logs to the quintessential birch bark canoes adopted by Europeans as the preferred means of transportation along the waterways of their new world.

Because an Indian canoe was completely biodegradable few archaeological remains exist to date the crafts appearance in the prehistoric past. Nevertheless, a few years ago 85 primitive dugout canoes were discovered in a lake bed near Gainesville, Florida. Most were radiocarbon dated to have been built between 3000 and 5000 years ago.

The wooden canoes had survived at the bottom of the lake for thousands of years until water levels dropped during a recent dry spell. They were up to 22 feet long, had rounded sterns and bows and had been made from the trunks of pine trees.  The dugouts were found accidentally by high school students working on an environmental assignment.

Eastern Woodland Indians in the southeast part of the continent were still using dugout canoes when Columbus crossed the Atlantic. Early settlers adapted them to be used with temporary sails to more easily transport goods up and down the rivers.

The northwest coast tribes built huge dugout canoes from giant cedars and used them to hunt whales in the Pacific Ocean. That mode of transportation went into decline along with the culture as a result of pressure from immigrating Europeans. 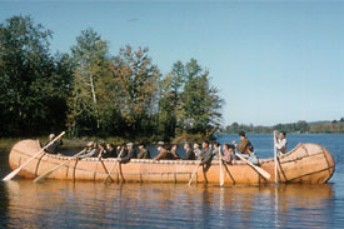 The Indian canoe in it's birch bark interpretation must be as close to engineering perfection as most inventions are likely to come. At some point the initial brainchild was improved upon until it fit it's purpose perfectly.

It had an ideal hydrodynamic form, it allowed a paddler to face the direction he was going and it could easily be repaired.  In case of total destruction birch bark canoes could be rebuilt in short order from materials at hand in the Eastern Woodland forests. Besides which, the canoes were small, light and fast. Even a 30 foot long freight canoe that could hold 18 people could be portaged by three men!

What doesn't come to mind when thinking canoes are the round boats used by the Mandans who lived along the upper Missouri River basin.  I don't know what the Mandan people called them, but settlers referred to them as "bull-boats" or coracles.  The boats were nearly circular, consisting of a light framework covered with skin.  They were clumsy affairs but were chiefly used in ferrying across rivers rather than long distant trips so they fulfilled a purpose.

The canoe in the photos was re-discovered in 2010 and is estimated to be over 250 years old . . . perhaps the oldest birch bark canoe in the world.  It had been stored in one of the Enys family’s barns in Cornwall, England for all that time.

Lt John Enys fought for Britain during the American War of Independence in 1776.  He had sailed from England with his regiment to  Quebec city, evidently fought in several altercations and when the war ended toured the area out of personal interest.  He took home the birch bark canoe as a souvenir.

Captain George Hogg, Archivist and Trustee of the National Maritime Museum Cornwall, says "When we received the call from the Enys family to identify their ‘canoe in a shed’ we had no idea of the importance of the find. We knew we had something special, but having worked with the British Museum on the artifacts and the Canadian Canoe Museum in Peterborough, Ontario, we now believe that this is one of the world’s oldest Birch Bark Canoes. This is a unique survival from the 18th century.”

In 2011 the canoe was repatriated to Canada where the Canadian Canoe Museum has been researching where the boat may have been built.

Find the tree, strip the bark, prepare the site.

Build a Birchbark Canoe - a Step by Step Guide

I grew up at a time when everyone had a canoe...sometimes several. It beat walking.