The Meaning of the Woodland Art Symbolism 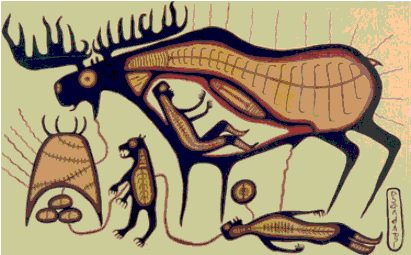 When Norval Morrisseau first began painting, his intention was to re-introduce the Anishnaabe world view into the contemporary consciousness. The Ojibwa culture had been all but obliterated by the imposition of external governance and the influence of christian churches.

Using primary colours straight out of the tubes, Morrisseau painted the spiritual reality that had been the foundation of Ojibwa life for thousands of years. Raised by his shaman grandfather, Norval was familiar with the symbols used on the midewiwin birchbark scrolls. He knew the legends and he was intimately familiar with the ochre images that were everywhere on the rockfaces that bordered the waterways surrounding his ome.

Woodland art symbolism permeated his early paintings. The following may help you understand why he incorporated certain things into his imagery.

Symbolism is still prominent in many of Leland Bell's work...particularly divided circles but sometimes he incorporates discrete lines of power.