An Ojibwa History of the New World 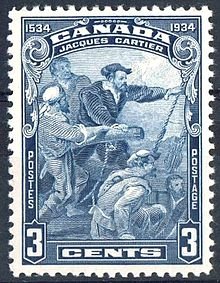 The Ojibwa have been in this part of the world before Europeans knew this continent existed. But when I was in school , Canadian history started only when Jacques Cartier explored the mouth of the St. Lawrence River.

Not much was said about us in the history books except a mention that we participated in the fur trade, and those comments weren't of course from our point of view. The books didn't even refer to us by our real name - Anishnaabe - the good beings.

Even today most folks know us either as Ojibwa, Ojibway, Ojibwe or Chippewa .

It's not your fault. Intercultural communications are difficult at the best of times and you didn't speak our language. Ours was an oral history and we didn't know you believed only what you read.

For thousands of years elders told us stories. They explained to us how the world was created, why we live in this part of it, how to behave to family members and neighbours, how to live off the land, how to resolve disputes and on and on. Sometimes the stories were just for entertainment but mostly they illustrated what was expected of us in our relationships with one another.

European traders and missionaries found us living on the shores of the Great Lakes about five hundred years ago but they didn't know at the time that we had just moved into the neighbourhood. 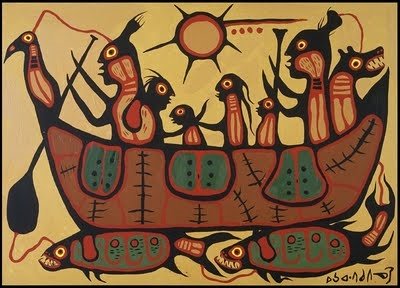 The Ojibwa had migrated from the shores of the big salt sea when, years earlier, our spiritual grandfathers predicted that a light skinned race of men would come to this land and that there would be great disruptions to the way we lived. Most of us took note and headed west.

Lucky for us . . . because sure enough interlopers landed on our shores.

In 1534 Jacques Cartier sailed into the mouth of the big river that every one now calls the St. Lawrence and he claimed the whole country in the name of the French King, Francis the First.

Monsieur Cartier led three more expeditions to the New France and over the years that didn't bode well for some folk who hadn't listened to the grandfathers when they said get out of town.

The Beothuk, who used to live in that part of the country now known as Newfoundland, were hunted down and exterminated by these thoughtless invaders whose culture didn't recognize the difference between a man and an animal...unless the man's skin was white.

We Anishnaabe on the other hand had skedaddled to the shores of the Great Lakes and were learning to live with the new world order by bartering furs for iron pots, sewing supplies and weapons. The European newcomers were fighting amongst themselves about who owned what and it was to our advantage to make allies.

Big changes were in the works.

In 1603 another Frenchman landed on our shores and made even bigger waves.  Samuel de Champlain began exploring the waterways that lead in and out of what we called The Big River and another French King, Henry IV, eventually gave him the job of establishing townsites in the New World and administering the lucrative fur trade.

The French authorities designed the fur trading system so that native people had to travel all the way to Montreal, Trois Rivieres and Quebec to trade their furs for regulated quantities of sewing goods, cooking pots, clothing and knives.

I learned in school that in 1611 a coureur des bois by the name of Etienne Brule was sent by Champlain from Montreal to explore the Great Lakes area where we had been hanging out.

Brule spent more than twenty years roaming the region and was severely berated by his boss and the Jesuit priests for adopting our customs and taking a country wife.

Champlain and the other fur trade administrators said he was a ne'er do well and the celibate Jesuits called him a lecher. But he helped us make contact with independent fur traders who were beyond the control of the colonial government. That worked for us, because not only were they the guys that gave us the best prices for our furs, they also came out to pick them up!

This was because more money could be made trading furs than by farming, so the more adventurous young European settlers traveled to the interior of the country to take back beaver pelts themselves.

By the middle of the century Messrs. Radisson and Groseilliers, two more coureurs de bois, made it all the way to Animikie at the other end of Lake Superior. Those guys had spent most of their lives in the "new world" and were at ease on the land and with our people and we were happy to do business with them. On their first return trip to Montreal they had more than 100 canoes full of furs!

When the French governor found out, he got his undies in a knot.  He was furious that his authority had been compromised and not only confiscated the trader's furs, but also gave them a heavy fine.

Radisson and Groseilliers secretly set sail for England and made a deal with King Charles II. The English King gave a hastily formed Company of Adventurers an exclusive trading monopoly over the entire Hudson Bay drainage basin. The company was owned by British investors but initially was managed in the New World by Radisson and Groseilliers.

The Company of Adventurers morphed into The Hudson Bay Company and became very prosperous.   The Bay was successful because the company made a point of sending teams of traders into the interior of the country so that they could pick up the furs directly from their suppliers...before they could be hauled to the buyers in Montreal.

The French and English fought for years to come over the lucrative fur trade. We Anishnabe tried to stay out of it, but sometimes we had to take sides.

The Hudson Bay Company is still in existence. In some communities in northern Canada it's often the only store for hundreds of miles around and there's often a Hudson Bay department store in the larger southern Canadian cities.  The owners sold out to American interests a few years ago.

My Dad sold furs to The Bay.

The Ojibwe and the Missionaries

Another early written mention dates from 1668 when a Jesuit missionary named Jacques Marquette made his way to Baawitigong and wrote home about us. He had good things to say about those of us who joined his church but didn't like those of us who had other ideas about how the universe was organized.

For hundreds of years governments and various church groups have done their best to obliterate the spiritual values that had contributed to the inner peace and mental well-being of generations of my people.

There was even a time when both the American and the Canadian governments outright banned the Midewiwin ceremonies of the Ojibwa, the Sun Dance of the Blackfeet and the Potlatch of the Haida.

In 1934 the Americans had second thoughts. They repealed the 1887 edict that had outlawed every form of Indian religion and passed the Indian Reorganization Act. It ruled that a Native American could no longer be thrown in jail for practicing old tribal traditions but that same legislation slashed the physical size of the reservations, eliminated the traditional tribal governments and imposed an administrative nightmare called the Bureau of Indian Affairs. Much the same happened in Canada.

The simple fact is that the Ojibwa interpreted and understood the world in different terms than western civilizations. Wisely the elders told their people to be discrete and furtive about their traditions and beliefs. Even now, hundreds of years later pockets of Anishnabe secretly follow the spiritual traditions of their ancestors and teach their children how to be one of the good beings .

When the Fur Trade Ended

By the middle of the nineteenth century the fur trade was dying. We Anishnabe had dispersed even further across the continent, and in many cases were even calling ourselves Ojibwa or Ojibwe or Ojibway. I guess we figured out that the expressions "When in Rome do as the Romans do" and "When life serves you a lemon, make lemonade" applied to us.

By the latter part of the 19th century the American government was brutally forcing tribe after tribe of First Nations people off their traditional territories onto small parcels of land that the European settlers didn't want.

In Canada, because the North West Mounted Police more or less applied the law to both Indian and whiteman in equal measure, the process of making treaty with the first Nations was less violent, but it had much the same result.

Overpowered by numbers and technology, many of Ojibwa made agreements with the Canadian and American governments and settled onto the reservations that we know today.

What Does the Future Have to Offer

Culture is a body of learned behaviors and beliefs that is common to a particular human society. Because the relationship between what is taught and what is learned is never constant, any culture exists in a constant state of change.

So it is with the Ojibwa.

Today, the young people he influenced are the elders who are guiding the generations that follow. The kids who attended the 1960's summer art camps on Schreiber Island with Daphne Odjig and Carl Ray are now themselves grandparents and honoured voices in their communities.

In my lifetime there's been a change. Seventy years ago school text books told the history of this country from the days that Jacques Cartier sailed into the mouth of the St. Lawrence up to the days of Confederation. Nowadays school text books delve into this country's prehistoric past and it's a rare Canadian school child who can name our first Prime Minister...the exceptions being immigrant children who have studied for the citizenship exam!

The Woodlands and the Plains Ojibway

Pressures from European colonization forced the Ojibway far into the northern forests of Canada and onto the Great Plains of both Canada and the United States.

It wasn't too long ago that children grew up in their family's canoe. I talk a bit about my experience but you'll notice at the bottom of the page there are links to pages about birchbark canoes.

Growing up in the bush north of Lake Superior wasn't all fun and games...although there was plenty of that. As kids we were expected to do our share of chores.

I've read accounts of the hard times some native women had because they lived in a culture dominated by men. I was lucky...my Mom had to work hard, but so did my Dad. If you read this story you'll see that there was a healthy balance of expectations that they had worked out between themselves.

Recent archaeological discovery of Jacques Cartier's first colony in what is now Quebec.