The Creation of Turtle Island

The Creation of Turtle Island - the Birth of North America 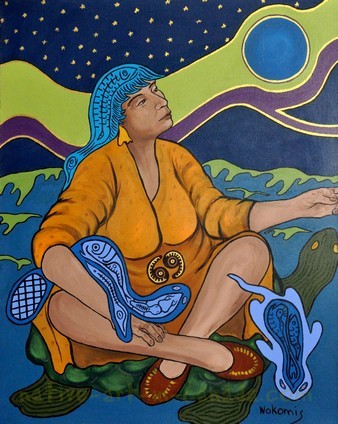 The Ojibwa and some other First Nations people, refer to the world as Turtle Island. Different people have different ways of telling the story of how this part of the world was created...sort of how the Protestants and the Catholics put a spin on their versions of Bible stories. But this is what I was told about how the world came to be...

If you've read some of my other stories you'll already know that the universe was created by Kitch-Manitou's abiity to envision all that was possible and then bring it into being.

I don't know where Kitchi-Manitou went after he created the universe and everything in it. I don't know how long he stayed away. But I was told that after some time had passed he decided to drop by to check up on things, so to speak.

On his return he looked around and saw that Mother Earth, Muzzu-Kummik-Quae seemed to be well. The animals that wandered the land, that swam in the seas and flew in the air held each other in balance as did the the trees, the grasses and the thorns.

But on closer look, Manitou realized that something else was possible.  He had another vision.  He realized that there was one more thing that he could create.

He could put on the world a special creature who, like himself, could dream.

All other animals Manitou had simply "declared" into existence.  But he wanted these new beings to be able to have visions - to see new possibilities for themselves and others so he knew he had to pass on his own spiritual essence.

A Spirit is Simply a Possibility

It was this feminine potential, personified as the spirit Geezhigo-Quae, to whom Kitchi Manitou ascended. I say ascended because Geezhigo-Quae (Sky Woman) lived on the Moon.

Here is what happened.

Even Manitou Accepted a Woman's Help

Kitchi Manitou, the greatest of spirits, the most powerful being in the universe had to ask a woman for help.

They joined together and Sky Woman became pregnant with the children of Kitchi Manitou.

And then the blighter disappeared. He went off and did whatever men and Manitou's do after they get their women pregnant!

So Sky Woman went down to Mother Earth to make preparations for the birth herself. She bent trees for a lodge. Tanned hides to cover it. Dried meat for the winter.

Many animals passed by to ask what she was up to. She explained that she was carrying Manitou's children and was preparing a home for them.

The word spread across the world. Most creatures were happy and excited that Manitou had given them the gift of his children.

But not the Water Manitous. They were mad!

You see, every life form that lived on Mother Earth needed water.  The supply of water was controlled by the Water Manitous. They knew that Kitchi Manitou was the most powerful of spirits and if his children walked the Earth their powers over the water would be diminished.

Actually, the Water Manitous weren't just mad. They were enraged!

In retaliation they used their powers to cause a great flood that spread across the entire world.

As the waters rose and destroyed her encampment Sky Woman retreated to the Moon. She looked down in dismay. Water covered the land, her man was gone who knows where, and she - pregnant with his children -was left to handle the chaos by herself.

You get the idea that this is a TRUE story!

But like every woman, Geezhigo-Quae had a mind of her own. She wasn't helpless. She knew that she could influence her own destiny. She could have a say in how things turned out. She made a plan.

Although the world was inundated with water below her, Sky Woman could see a few animals that were not under the total control of the Water Spirits. That was because although they breathed air, they knew how to swim!

The first creature she called to her aid was the giant turtle.  But she asked other creatures to help her, too.  The loon, the beaver, even the little muskrat were among her assistants that day.

What she told them was this.

The giant sea turtle went first because he was the biggest.  He  tried and tried but couldn't descend to the  bottom of the rising waters.  When he came to the surface for the last time he invited Geeshigo-Quae to come down from the Moon and sit on his back so that she could direct the operations.

All afternoon the loon and the beaver took turns diving but they just couldn't get to the bottom of the murky depths.

At the end of the day it was only the little muskrat who hadn't given it a try. Not because he didn't want to help, but because everyone knew that muskrats don't really dive deep. Muskrats live in shallow sloughs, or at the edge of rivers and lakes. You'll never see them swimming in the deepest water.

But if you look at your own life, you'll see that there are times when you just have to give up your old story about what you can or cannot do. Sometimes in your life you have to burst from the confines of your story and grow into a more capable person.

That day, long ago, the muskrat decided that with no one else available to help it was up to him to do the job.

He took a deep breath.  Then another.  And another.

Then in an instant he disappeared below the surface.

Sky Woman and her friends waited.

They waited and waited...but the muskrat didn't return.

The sun dipped below the horizon.

The moon cast a sad blue glow across the water.

It was a long night.

The Dawn of a New Day

As the sky grew light Geezhigo-Quae scanned the waves.  She strained to catch sight of the muskrat.

Suddenly she gasped.  She pointed across the water. Something floated in the distance.

The turtle swam quickly towards it and as they got close Sky Woman realized it was the muskrat...but he was dead.

She pulled him from the water, sad that he'd given his life trying to help her build a home for her children.  She cradled him in her arms and saw that one of his paws was clutched tightly.

Gently she pried it open.

There was the soil from Manitou's world!

The little muskrat did it!

He did what the bigger animals couldn't. He did what no other muskrat had done before.

Geezhigo-Quae was so happy.  Now she could create a home for Manitou's children!

To thank the muskrat she bent over and breathed life back into him . . . which is why we still have muskrats today.

Then she took the soil and breathed into it the characteristics that would allow it to provide nourishment, shelter, teachings and incentive to the beings that would live upon it.

That soil she rubbed on the turtle's back.

She rubbed the soil round and round. As she did so the Muzzu-kummick-quae again took shape above the water. Geezhigo-Quae continued to move over the new soil. She walked in wider and wider circles. And the Earth was re-created.

Forever after the Ojibwa called this land Turtle Island.

Eventually Kitchi Manitou returned and was grateful to Geezhigo-Quae for her strength and her compassion.

He decided that she must have a new name . . . a name that would always be voiced with honor and respect. Thereafter she was known as Nokomis - the Great Mother, creator of the Anishinabeg, the Good Beings.

As time went on and people spread across the land they sometimes called themselves Ojibwa,  sometimes Chippewa, or Ottawa, Pottawatomi and Mississauga.

Eventually they were known as Canadians and Americans.

An Elder's thoughts on mainstream perception of Native American spirituality.