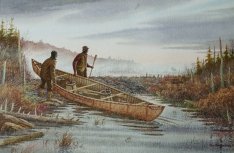 When people think of Ojibwa transportation they almost always think of canoes.  I think you'd be hard-pressed to think of a way to improve on the design.

Made from birch bark the traditional canoes were strong, light and able to carry very heavy loads.  A 36 foot freight canoe, for example, could carry 6000 pounds and yet be portaged by four men.   The looked fragile but in reality were able to withstand collisions that might cripple a wooden boat or a canvas covered cedar strip canoe.  A birch bark canoe would often just bounce off a rock or log.  Even if it suffered damage it was actually easily repaired.  A piece of birch bark could be laced over the rip using split spruce roots and with the application of a few dabs of spruce gum mixed with tallow and some charcoal, the canoe was ready to be launched again.

Even if traveler suffered a catastrophic loss, an experienced builder could build a new canoe within a week with materials that were readily at hand.

Designs varied from community to community and sometimes from family to family.  Some areas were known for their up swept prows, others for elaborate patterns that were cut from birch bark and incorporated in the construction process.

Snowshoes are another item that people name when they think of Ojibwa transportation. Different tribes were known to have developed different designs, but basically snowshoes were made egg shaped or long and narrow.

Traditional snowshoes had hardwood frames with rawhide lacing. Hunters needing to travel swiftly through heavily forested areas built long narrow snowshoes with upturned toes that were less likely to catch in the underbrush .

Bearpaw snowshoes are oval shaped, rounded and upturned on both ends for maneevering in tight places.

Ojibwa transportation wouldn't be complete without mention of toboggans even though the Anishnaabe never used that word themselves. They used nobugidaban because nobug means flat and daban means drag. Somewhere back in time, I think one of the French couer du bois mixed it up with one of their words, but I don't speak French well so I don't know for sure.

The slats for the toboggans were split from straight logs of hard wood that had been cut in winter when the sap wasn't running. The front end was heated in boiling water then bent upwards. In the old days rawhide covered the bent front end to protect riders, loads were tied to cleats or rawhide straps on the sides, and they were pulled either by dogs or people.

A traditional Ojibwa nobugidaban had a strap at the back that was often held by a companion who ran behind the load. He could pull hard if it looked like the toboggan would slide out of control on a big hill.

From dugouts to birch bark.

Start with the tree, peel the  bark and prepare the site.