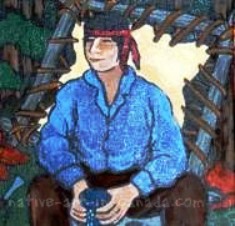 For the Ojibwa, tea was the favored drink, served any time there was a fire available to heat water.  Here's a picture of a hunter having a nice cup of tea and having a rest before he carries on with scraping the hide.

Ojibwa tea leaves weren't purchased in a store, then hauled miles and miles through the bush to our camps. Ojibwa tea was locally grown...very locally grown. The grand tea estates in India and China made no money from us, by golly.

Ojibwa tea was made from leaves and roots that were often harvested at the very moment that the notion of a 'nice cuppa tea' flitted into consciousness.

Sometimes it was as easy as reaching over and grabbing a handful of spruce needles just as the water came to a boil, or snatching at the ferns growing near the stream.  Although leaves could be used freshly picked it was common dry and chop them and store them for use during the cold months.   Raspberry, peppermint, burdock with and without the nettle, and beebalm were used in that way.  Oswego tea was made from the leaves of bee balm - the monarda that might be growing in your grandmother's garden.

A tea was also made in the spring from the flowers from the linden tree.  And I almost forgot licorice root.  Peel it, pound it, chop it and store it to make tea or use as a flavoring. 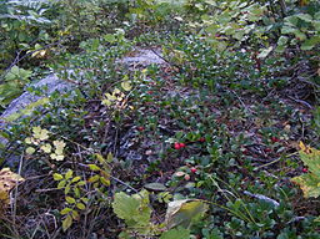 Red bearies on kinninnikick spreading over a rock.

You might have heard about labrador tea.  It's made from the leaves of bearberry - that low sprawling plant with red berries that's growing over the rock in the picture.  The Ojibwa called the plant giniginge which means to mix something living with something not living.  Some of you will have heard that word as kinnikinnick.

In prehistoric times the Anishnaabe didn't use giniginge for tea - they smoked it.  Smoking was part of the spiritual traditions across the entire Eastern Woodland territory which extended throughout the boreal forests from Florida up to the headwaters of the rivers that flowed into Hudson Bay.  It was only in the southern part of the territory that tobacco leaves were smoked.

A blend of burdock, slippery elm, sheep sorrel and Indian rhubarb root that was a traditional Ojibwa medicine