An Elder's Rant on the Mainstream Perception of Native Spirituality 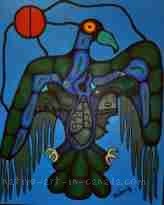 It's very difficult for me to even write the words 'Indian religion' and the phrase 'Native American Spirituality'.

There is so much bunk on the subject that I feel incapable of making an impact on the misperceptions, the untruths, the fabrications, the bottomless hole of garbage that is everywhere....EVERYWHERE...on the world wide web on this subject.

What terrifies me is that school children are asked to report on this topic. I can see in my web statistics that the kids Google words like Indian religion, Native American Spirituality, Ojibwa beliefs, eastern woodland Indian religion, native myths, and Indian legends. These children...they probably run in age from 8 to 18 years...have been taught to believe what they read.

They're asked to do some research and then either fill in the blanks or write a sentence or two on Indian Religion or Ojibwa spirituality or perhaps the significance of the corn ceremony.

These questions are defined in such a way that requires the children to come up with a definitive answer to what an entire continent full of people thought was a reasonable explanation for the existence of the universe, the relationship between humankind and their "god", the devotional and ritual observances associated with this explanation and perhaps a comment on the moral code governing the conduct between all those Indian folks.

If you go looking you'll see that there are no shortage of "answers".

I just read that there were 1.2 million (or up to 12 million depending on who's doing the counting) First Nations people scattered across this continent when Europeans first came ashore.

In that context, what valid statements can you make about Indian religion and native American spirituality?  heck...what follows isn't a definitive answer either...it's just an old woman's re-telling of stories she heard as a child...and that at least gives it aspects of verisimilitude.

The Story of Turtle Island