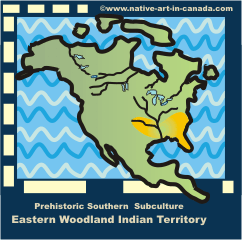 
Up to 500 years ago typical residents would have been the Natchez, the Choctaw, the Cherokee and the Creek as well as less dominant tribes. The Seminole living in and around the Everglades were also Eastern Woodlands Indians.

The Introduction of Farming

Hunting and fishing, as well as gathering seasonal berries, roots and shellfish had always been an important source of food and the raw material needed for clothing in this part of the world. But, from approximately 3000 to 2200 BP (BP means before the present time) the population began experimenting more and more with agriculture. Traders who had travelled to the southwest portion of the continent (in the area that is now New Mexico, for example) had been introduced to the concept of farming. When they returned home they launched the idea of 'grow your own food' to their communities.

Although it started on a small scale, crop production became more and more significant. By the time Europeans came to this continent centuries later, the Eastern Woodlands Indians living in the south were growing maize, beans and squash on a large scale and they had learned to cultivate and process tobacco. To till the soil for these endeavors they used hoes with blades made from stone, bone or shells.

Keep in mind that the entire area was deeply forested but despite their stone age technology, the Eastern Woodlands Indians were able to clear enough trees to establish large gardens.

With a stone axe, they removed strips of bark from around the entire circumference of a tree. This of course killed the tree but eventually allowed light to reach the forest floor. The size of the gardens depended on how many trees were killed.

Despite the fact that some clever soul had learned that putting a piece of fish in the planting hole provided food for the seed, over time the soil became infertile. The farmers had to clear plots further and further afield from their village communities.

Village life itself was a direct result of farming. Growing crops meant that populations became sedentary...they no longer had to pack up and follow the migrations of wild game.

And with the development of stable community life came more social and political complexity. In earlier times, people had to use almost every hour of every day hunting, fishing and gathering in order to have enough to eat. But with the introduction of farming, some people found that they could put their time to other use.

While some members of the community looked after the crops, others found that they could make items to trade for what they didn't grow themselves. Various people, even communities, began to specialize in pottery, projectile points and other utilitarian objects. This hadn't been possible when every spare moment was given to staying alive.

Although community fields were generally in the open, frequent and intense warfare made it necessary to enclose the villagesthemselves behind wooden palisades reinforced with earth. Smaller settlements were under the protection of larger villages.

In warm weather these southern men typically wore only breechcloths but used deerskin shirts, leggings and moccasins in the winter months. Women fashioned wrap-around skirts from pieces of fabric they wove from plant fibres and added deerskins and moccasins as needed. Adornments were made from shells - either sewn to the hides or strung into body ornaments. Tatoos were common on both men and women.

Like people everywhere, the Eastern Woodlands Indians regarded themselves as spiritual beings. Their physical lives were directly connected to their view of a supernatural existence.

Just as Christians pray and go to church, or Muslims pray and go to their mosques, the Eastern Woodlands Indians consulted their spiritual leaders for advice on how to conduct their lives.

Daily activities and rituals, often, but not necessarily under the direction of a shaman elder, influenced their behaviors. Although rites were performed around hunting and fishing, those ceremonies associated with agriculture have been most heavily documented. For example, the annual Busk or green corn ceremony was a thanksgiving festival performed by the Cherokee, Creek and many other southeast tribes. Other rituals included a new fire ceremony and a sundance.

Elaborate burial practices came into existence at the same time as village life developed. In our present day culture we set aside special places to bury our dead because it doesn't seem appropriate to put Grandma and Grandpa under the porch steps. The Eastern Woodlands Indians who lived below the Great Lakes, also needed special places to bury their dead. Their death rituals centered around burial mounds. The mounds built up over the years and sometimes became large and complex.

Archaeological evidence indicates that the dead buried within the mounds were often sprinkled with red ochre (an iron oxide) and local and exotic materials were sometimes entombed along with the bodies. For example, copper bracelets, sheets of mica, cut shells, spear points or tubular bone pipes have been excavated.

At the time Europeans reached the shores of North America, the Ojibwa Indians were the largest tribe on the continent. They referred to themselves as Anishnabe - a word that means the good people.