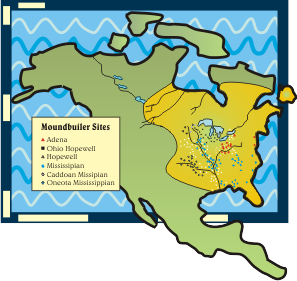 The term 'mound builders' doesn't refer to any one specific culture, but rather encompasses several cultures that spanned the 4000+ year period and ranged from mobile hunter-gatherers to sedentary farmers.

The earliest mounds were built approximately 4000 years ago (The Archaic Period) at a place now known as Monroe, Louisiana. The site consists of eleven mounds. The Archaic mound-building tradition continued in that general region until approximately 500 BC. A site known as Poverty Point, in West Carroll Parish, Louisiana,includes two large mounds, one of which reaches 65 ft (20 m) high. Each of those mounds is surrounded by six concentric earth ridges.

The Archaic culture morphed into the Early Woodlands culture but the mound builders traditions continued with the evolution of the Adena Mound Building culture (circa 1000BC - 300BC) and then the emergence of the magnificent Hopewell mound builders (circa 300BC - 700AD).

Other less significant societies extended the Mound Builders influence to about 1300 A.D

The prehistoric mounds had many forms and seem to have satisfied a range of functions.

Large, mainly dome-shaped mounds appeared throughout the Ohio and Tennessee river valleys, some in the form of animal effigies. In the Hopewell culture, centered in Southern Ohio and Illinois, earthen geometric enclosures defined areas ranging from 2.5 to 120 acres (1 to 50 hectares), and some mounds reached 65 ft (20 m) in height.

Many served as burial mounds, sometimes for individuals and sometimes to hold the remains of a number of people. Others were temple mounds - earthenwork platforms supposedly used for religious ceremonies. Burial mounds were more common in the Archaic and Early Woodlands Periods and temple mounds were in the majority at some locations during the Mississippian period (after A.D. 1000).

At the time Europeans reached the shores of North America, the Ojibwa Indians were the largest tribe on the continent. They referred to themselves as Anishnabe - a word that means the people.