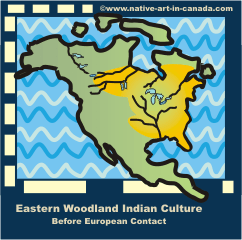 Eastern Woodland Indians is a term coined by twentieth century anthropologists and happily picked up by school boards attempting to simplify a program of native studies.

The term describes a polygot of tribal societies that once inhabited an area in North America that extended from the northern coniferous tree line and the headwaters of the McKenzie River, through the vast boreal forests surrounding the Great Lakes and the shores of the Mississippi River, south to the Gulf of Mexico and east through the Carolina forests to the Atlantic seaboard.

The Woodland culture developed over time, but became cohesive approximately 3000 years ago. Depite the difficulties with transportation and communication over such a vast area, the glue that held it all together was dodem...the clan system of governance. There were seven matrilineal clans and membership in one clan or another was universal across the vast Eastern Woodland Indian territory. Each clan had a specific responsibility to the welfare of the society as a whole.

European ears heard "totem" and for hundreds of years have made up silly stories about what the word meant.

When First Nations people were forced onto reservations dodem almost became extinct...the exceptions being in one or two remote areas of Canada where people were not living under the control of Indian Affairs and governed themselves and where they were also able to resist the influence of mainstream religion. Recently, under the direction of elders, young men and women on at least one Canadian reservation have begun the process of educating their community members in how dodem might eventually replace the imposed band council.

In the sense that all Woodland First Nations were living in heavily forested areas, many aspects of the cultures of the various Eastern Woodland Indians were similar. The development of thick walled pottery that was widely distributed throughout many parts of the territory, especially below the Great Lakes, for example.

But look carefully at the map at the top of the page and notice that the territory extended thousands of miles.

Despite the fact that dodem was the universal system of governance, differences in climate and the restrictions imposed by the transportation and communication systems available in such a huge territory, meant that there were differences in social and political structures, religious beliefs and language.

Variations in temperature and terrain from one end of the region to another meant that there were significant differences in types of housing, food resources and clothing.

At the time of European contact, there were three large sub-groups of Woodland Indians that could be divided geographically (north, northeastern and southeastern) and very roughly into three language families...Algonquian, Iroquoian and Muskogean.

At the time Europeans reached the shores of North America, the Ojibwa Indians were the largest tribe on the continent. They referred to themselves as Anishnabe - a word that means the people.