Woodland Culture in the Northeast 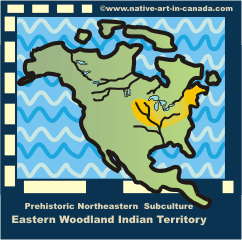 There were many similarities between the Eastern Woodland Indians who lived below the Great Lakes and their cousins who lived in the rocky forests of the Laurentian Shield north of the Lakes.

The system of governance was the same, languages were similar if not always identical, and religious beliefs were somewhat alike.

Nevertheless, the warmer climate and the more fertile soil in the southern latitudes allowed for advances in agriculture that wasn't possible in the higher latitude and that meant cultural changes.

Farming, even though it was very rudimentary, allowed a more sedentary culture to develop which required different social and political structures than the more northerly migrant hunting gathering activities.

Before European contact, the predominant language family in use above and below the Great Lakes was Algonquin, but there were large and powerful enclaves of Iroquoian speaking people and in the western parts of the territory the Dakoda language was prominent. 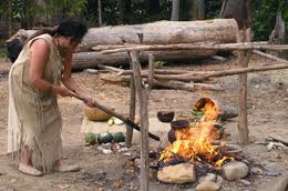 Despite differences in language, 500 years ago there was a general pattern of existence that was common to many communities within the Eastern Woodland Indian culture.

Even in areas in which people had begun to farm, hunting was universal, and a diet of deer meat was supplemented with bear, moose, smaller game and fish. Coastline communities gathered shellfish. Everyone gathered seasonal berries and fruits.

Also, everyone cooked in vessels made of wood and bark though the more southern communities had long ago learned to make simple heavy walled black clay pots and that skill gradually became part of the culture of much of the woodland territory. As time went by a region could be identified by the pottery it produced.

The Effects of Geography and Climate

But there were also major differences between the Eastern Woodland Indian culture that survived on the Laurentian Shield and the Woodland culture that developed below the Shield.

The land below the Laurentian Shield had not been scraped bare by the force of glaciers during the last Ice Age. Top soil remained and the climate was more temperate.

If you look at a map you'll be able to draw an imaginary line from Great Bear Lake in the Arctic Circle to the most easterly of the Great Lakes and up the St. Lawrence River to the ocean.

Above that line is where the glaciers did there work and even today there is only nominal agricultural activity.

An Agricultural vs Subsistence Economy

A hunting gathering economy is a subsistence economy. Community members - even children - have to expend most of their energy to provide food, clothing and shelter to meet the needs of a small family based unit.

A hunting gathering culture is also a mobile culture because the group must always be ready to pack up and follow the wild game. A mobile culture made of small self-supporting groups has a different social and political structure than a society that needs to stay in one place and tend to crops.

Although dates vary from place to place, the culture of the Eastern Woodland Indians living in the northeast transformed from a hunting/gathering economy to an agricultural economy almost 3000 years ago.

The change was not universal, it didn't happen overnight and there were many, many regional variations of the process.

Many communities, especially those in the most southern part of the territory, came to rely on crops to provide a substantial portion of their diet. For the most part, those communities then had to stay in one place and the result was that they developed new political systems. When many people live together in a relatively small space rules of conduct emerge that differ from the conventions of a culture that is composed of many small migrant groups. Leadership roles adapt.

A small family group may only need a single strong head of household, but a community of many households may need a chief. 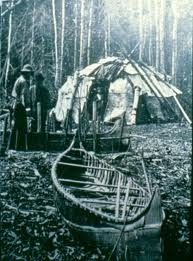 Dome shaped wigwams made from bent saplings covered with bark and hides were prevalent, but not universal throughout the Eastern Woodland Indian culture. The structures were often covered with sheets of tree bark arranged in such a way that smoke from open fires could escape through the roof. If bark wasn't available mats were woven from reeds and used as a reasonable substitute.

Some communities preferred to construct cone shaped tipis...not as wide and tall as those made by the First Nations' people who lived on the prairies, but of similar design. A number of poles were positioned into a conical shape and bark or hides were used as covering.

The neighbouring Iroquois, who had a different clan system and a separate language also had a different method of building their homes. Unlike most tribes living in the Eastern Woodland Indian territory, the Iroquois built long communal dwellings capable of housing more than a dozen families on raised sleeping platforms. The buildings were post and beam construction with the addition of bent sapling frames.

By 1000 BP (BP means before the present time) large villages spanned the Mississippi and Missouris River valleys. This is an area that has become known for impressive burial mounds and other earthworks.

An exceptional feature was sometimes an earthen temple mound which served as a raised platform on which the major community buildings were placed. They served as political and ceremonial centres.

Some communities contained large earthen charnel houses which received the remains of the dead, but burials were more likely to be in large areas somewhat like today's cemeteries or in the earth floor of homes.

Birchbark canoes were widely used by the Eastern Woodland Indians culture. Communities, even families, put their mark on the culture by preferring one design over another.

It's believed that the birch bark canoes evolved from dugout canoes.

At the time Europeans reached the shores of North America, the Ojibwa Indians were the largest tribe on the continent. They referred to themselves as Anishnabe - a word that means the good beings.

Although the Eastern Woodlands Indians culture thrived particularly well in the forests and fertile soil along the Ohio River and south along the Mississippi to the Gulf of Mexico.

The Mound Builders is a term used to describe several First Nation's cultures that built earthen burial mounds and other earthworks across a large area of North America that extended from the Great Lakes to the Gulf of Mexico and from the Mississippi and Missouri Rivers to the Appalachian mountains.