The Eastern Woodland Culture in the North 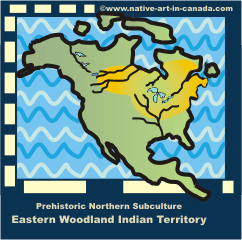 At the time Europeans reached the shores of North America, the Ojibwa Indians were one of the largest tribes on the continent.

We referred to ourselves as Anishnabe - a word that means the good beings.

The Anishnabe territory extended from the eastern seaboard, west to the headwaters of the Mackenzie River. These lands were bounded in the north by the sub-Arctic tundra and followed the Mississippi River south to the Carolinas.

Within that immense region there were distinct tribal sub-cultures that had developed because of varying temperatures, lengths of the seasons, soil conditions and terrain. As well, transportation and communication being what it was in those days, people living in one region had few chances to learn what was happening thousands of miles away and either missed the opportunity to adapt to new ideas or simply created their own social quirks.

For example, the northern Cree tribes were part of the pre-historic Eastern Woodland culture, and like the most northerly Ojibwa Indians, had adapted their lives to a part of the country covered with more coniferous evergreens than broad leaf hardwoods. Yet the Cree language is different to the tongue spoken by their Ojibwa cousins. The two languages are much like Spanish and Italian...they have an obvious common root...but speakers don't necessarily understand one another.

On the surface there is another glaring exception to the idea that Ojibwa Indians culture extended throughout the region...that is, the strong presence of the Huron and Iroquois tribes who continually battled with their neighbours. Unlike Cree, the Iroquois language is not similar to the Anishnabe language, and because the Iroquois farmed they were a more sedentary society, but the glue that bound all the Eastern Woodland tribes together was their more or less cohesive spiritual view of the world and the social responsibilities imposed on each individual by their dodem association.

Dodem was the system of governance in existence before Canadian and American governments pressed native people onto reservations.  Think of it as a sort of federal government but instead of having provinces or states you had clans.  Everybody belonged to their mother's clan and people had to marry outside their own clan.

If you had a problem with your neighbor, for example, that you couldn't figure how to resolve, you'd first ask the help of your family.  If they're input couldn't resolve the issue then you'd take the problem to your own clan to see if they could come up with a solution.  If that didn't work you and your neighbor would take the issue to the Dodem - the gathering of the clans that was held twice a year.

The clans sat in their own special places round the fire and you and your neighbor would explain the problem to each of the clans one after the other.  Each clan would suggest a solution.  Every clan had to agree on the way to resolve the issue so sometimes discussion went round and round the circle.  When a consensus was agreed upon you and your neighbor had no choice but to do what you were told.  If you didn't like it ... tough.  You should have been more agreeable with one another in the first place!

All Ojibwa, even the most southerly ones who farmed, were hunters and gatherers.

Hunting was done with spears, clubs and, of course, bows & arrows. An assortment of traps, snares and deadfalls were also useful in disabling or killing prey.

The quarry could be deer, moose, elk and bear plus small animals and various birds. Fish of course were plentiful, as were seasonal crops of berries, nuts, roots, and seeds. One of the most important harvested crops was zinzania palustris, the so-called wild rice.

Although maple syrup was an important part of the Ojibwa Indians diet in much of the territory, the Cree and their northern Ojibwa cousins couldn't harvest sap because maple trees didn't grow in their part of the world. Some tribes experimented with tapping other trees and learned that the sap from birch trees can also be made into a useful and sweet syrup. They didn't have to rely entirely on the original low-carb diet...lots of protein with the addition of seasonal fruits, plant stocks and roots.

The Ojibwa Indians living south of the Great Lakes had access to all those food sources, but the climate and terrain also leant itself to agriculture. Better soil conditions and warmer climate allowed those Anishnabe to grow small gardens of corn, and beans - a skill that had migrated along the trade routes to the southerly Creek and Choctaw tribes.

For the most part Ojibwa Indians built wigwams from bent saplings and covered the exterior with bark or hides. A small wigwam could be built in a day. More time was spent on constructing larger wigwams that could shelter a dozen or more people through severe winter weather.

But if instant shelter was needed it was easier to construct a small tipi because small trees could be easily stripped of their branches and used as poles and a combination of hides, bark or woven reed mats could cover the structure quickly.