This is the Creation Story of My Childhood 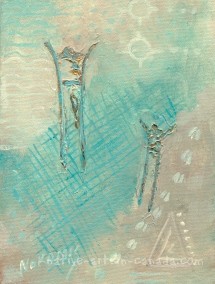 What I mean is this:

Although there was nothing, it was conceivable that there might be something other than nothingness.

And if it was conceivable that there was a single something other than an all consuming dark void, then maybe many other things were possible, too.

A human mind is not capable of envisioning and creating that much possibility.

The Ojibwa call this being Kitchi-Manitou - the Great Mystery.

Nowhere on this world has the human mind been able to understand everything in the universe. Sometimes we get boggled just by trying to think of some new idea. For example, if I traveled too far down the road of possibility, you'd soon get lost in the morass called confusion because the distinctions fall quickly into the abstract.

That's why people the world over have always personified their deities. It brings the concept of god down to the level that a mere mortal can understand.

Human minds have always made up stories about the divine beings that bring reason and purpose to their lives.

Folks the world over can tell you stories about what their god thinks, what he likes, what he doesn't like. They can even tell you what that means and the consequences if your actions don't line up with the deity's expectations of you.

The Ojibwa didn't develop a system of writing so that's why you, dear reader, might have not given our stories credence.

So over all the years, over the entire world, people have been making up stories about a divine being. And of course our egocentric minds are sure that OUR story is true and that the stories of others are myths.

But . . . Back to the Ojibwa Creation Story

Kitchi-Manitou had a vision (see the personification?). Because he was so all-mighty he could see everything that was possible in the universe.

Sorry to interrupt again, but I have to clarify something else.

A vision is the ability to envision, to see what's possible. It's not necessary to climb to the top of a mountain in the pouring rain and starve yourself to have a vision...or in the case of Moses, wander around the dessert for more than a month without eating or drinking. Visions may occur under those circumstances...they probably do...but consider that a vision may be something as simple as suddenly seeing a new solution, a new possibility for yourself and others.

Again . . . Back to the Creation Story

Anyway . . .Kitchi-Manitou had a vision.

He saw in his mind all the suns and the moons that we know and all that we don't know.

To our sun he gave the power to heat and light the earth.

To our earth he gave the power of growth and healing.

To the water on the earth he gave the twin powers of purity and renewal.

To the wind he gave the power of the breath of life itself.

Kitchi-Manitou saw that on this world there would be seasons and patterns of existence. There would be life and death. There would be joy and sorrow. Some creatures would walk, some would fly, some would swim. He perceived their feelings and their needs, now and forever, and he envisioned how making one life interdependent on the other could provide for every creature's needs.

And then having envisioned what was possible, out of nothing Kitchi-Manitou created the universe and everything in it that we know and everything that we don't know.

And because you and I and all others things - both animate and inanimate, were created by Kitchi Manitou from nothing but his knowing that it was possible- we will always be part of his spiritual essence...not separate...part of.

The cosmos was created because Kitchi Manitou knew it was possible that it could simply be.

Turtle Island is the name given to the part of the world you call North America. This is the Ojibwa story of how North America came to be.

This is an ever so brief explanation of what a vision quest meant to Ojibwa people in my youth. There's a HUGE amount of misinformation about this subject on the internet. This is not all I have to say about it, but it is what I am offering you now.

An Elder's Thoughts on Native Legends and Myths