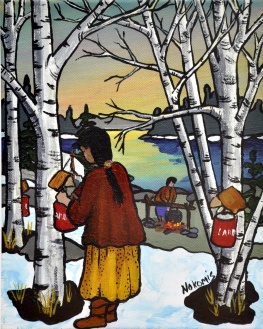 Birch syrup is a good substitute if maple trees aren't available, but the sap runs about a month later...probably because the birch grow in more northerly climates...so the tapping window is shorter. The birch trees sometimes make up for their tardiness by producing more sap than the maple, but it's less sweet and takes longer to boil down to sweet syrup and sugar.

The sap is clear, very similar to water, and has a silky texture.

Small trees don't produce enough sap, large trees run fast and its hard for one person to keep up with the flow. A medium sized tree seems to flow at a decent rate for one person to manage. It's a good idea not to use the same tree two years in a row in case it needs time to recover.

Start by making an upwards slanting cut just under the bark with a hatchet and prop the resulting curl of bark open with a small twig. The sap will drip from the curl into containers that are either propped against the tree with a willow stick or tied around the tree with cord.

I was talking to an old friend the other day...Jessie Kakegesic. She said that boiling the sap required a hot fire so there was much back and forthing to the bush to bring more and more wood. But at the same time the cook was gathering wood, she had to pay close attention to the sap. If the syrup wasn't cooked long enough it was too watery and had a tendency to ferment. Boiled too long it would turn to sugar...not a problem if that was the intention, but a nuisance if the goal was syrup.

The syrup was ready when it was thick like molasses and at that point It could be made into sugar in the same way as maple sugar.

Traditionally, birch sap was used as a beverage.. . consumed either fresh or naturally fermented.  To avoid a bitter taste the sap was harvested before the buds leafed out.

Neither birch syrup or birch sugar has the taste of wintergreen because the essence is volatile and driven off by boiling.

Fresh birch sap, on the other hand, has just a hint of sweetness and a slight wintergreen taste. When no fresh water is obtainable, sap from a birch tree makes a useful drink. It tastes almost like cold water. Fresh spring birch twigs, when steeped in hot water make a nice wintergreen flavoured tea. The same tea can be made by scraping the underbark of the tree, carefully drying the gratings in the shade and using them at a later date to make a flavourful tea.