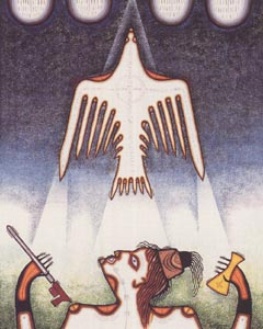 Blake Debassige was born in 1956 in West Bay on Manitoulin Island in Ontario. He was one of the youth who summered on Schreiber Island the year that Tom Peletier started the Manitou Arts Foundation to encourage young people to consider a career in the arts following Norval Morrisseau's great success in Toronto.

Daphne Odjig and Carl Ray mentored the young people that summer as part of their individual commitment as members of the Indian Professional Artists Inc. to promote the concept of native art in Canada.

Most of t he attendees at the summer workshop - Blake, Shirley Cheechoo, Randy Trudeau, Leland Bell, Joseph Linklater and Martin Panamick - all developed careers in the arts. They were the second wave of Woodland artists.

Blake Debassige himself doesn't like the term because he feels that it's tended to present the group as a homogenous movement rather than a collection of individuals who have worked in artistically diverse ways.

From the inside looking out there's evidence to back up his point of view...he and his wife Shirley Cheechoo have made large contributions to the world of film and theatre, for example...but from the outside looking in their paintings have much in common with the idea of Woodland art. Bright colours, stylized two dimensional imagery, thick black outlines, etc.

Like other woodland artists Debassige's paintings explore the teachings of the Anishnabeg - legends, interdependence, spirituality, but he also investigates current environmental issues and family dysfunction and in that respect has expanded the aesthetic themes of the movement.