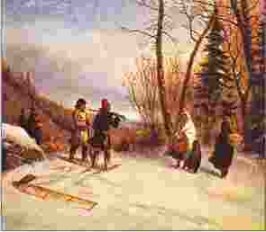 Initially they were young men hired in the latter half of the 17th century by explorers like Samuel de Champlain or fur trading organizations to scout opportunities and explore New France.

But the young French coureurs de bois were adventurers at heart and didn't take well to regimen and authority. They learned quickly that the fur trade was very, very lucrative and that they could make more money acting independently.

Before the coureurs de bois learned the language and customs of the Ojibwa, we had to travel great distances to deliver furs to the Montreal authorities and take whatever was offered in trade. But the coureurs de bois came to us and this upset  authorities. They didn't want unregulated independent traders who might offer native trappers a better price without the hastse of long distance travel.

By the 1680's governors of New France had developed a scheme that was supposed to work for everyone. They established a permit system that in effectively legitimized the coureurs de bois and at the same time they gave them a new title - voyageurs. The voyageur either held a permit himself or was allied to a Montreal merchant who had one.

At the same time, in an attempt to dominate the fur trade New France expanded north, west and south. They established forts and trading posts and negotiated trading treaties with various native tribes. Before long the system became very complex and the voyageurs found that they were more employees than traders themselves. The voyageurs became the crews that transported trade canoes between one trading partner and the other.

The big guys won out in the end.