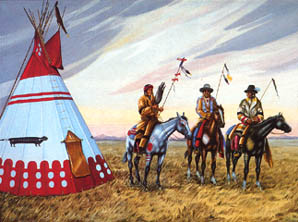 Born on the Standoff Reserve in Alberta in 1925, Blood Indian artist Gerald Tailfeathers had extensive formal art training. He began his schooling at Saint Mary's Lake Summer Art School, but in 1941 he studied at the Banff School of Fine Art under the direction of Charles Comfort, Walter Phillips and H.G. Glyde. The following year he moved to the Provincial Institute of Art and Technology in Calgary to learn about commercial design. Gerald worked as a graphic artist for the Hudson's Bay Company but at the same time completed prodigious amounts of work in charcoals, pastels, watercolours, temperas, pen and ink as well as oils. By1957 he began to stress historical accuracy.

His career spanned a period of time when native art wasn't much recognized by galleries or the buying public. But, he received commissions for paintings for the Indians of Canada Pavilion at Expo '67 in Montreal, the Glenbow Museum in Calgary and for Canada Post.