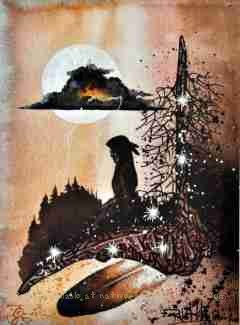 The vision quest was a spiritual adventure that wasn't embarked upon until a boy had experienced a few adventures of the physical kind.

In the cultural traditions of the Ojibwa, it wasn't physical or sexual maturity that made a man a man. Courage in the face of danger defined manhood.

To stay alive in the harsh environment that was the Anishnabe world, boys were taught survival skills from an early age. They had to be able to expend physical effort despite exhaustion. They had to endure cold and pain. And they had to kill - often at great risk to themselves.

It was an act of courage in the face of injury or death that allowed a boy to become a man. Hollywood at least got something right when they referred to young Indian men as Braves.

A single act of bravery might elicit the passage of a youth to the company of Warriors by a ceremonial presentation of a feather or a bear claw. But bravery went beyond a single daring act. Bravery was expected at all times, in every circumstance. Courage made the man.

But it wasn't the world of blood and guts that a youth had to face when searching for a meaning for his existence. It was deep into the spirit world that he had to venture.