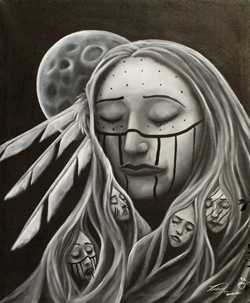 Patrick Ross is a native artist from the Sioux Valley Dakota Nation Reserve.

Street smart and edgy he didn't pay much attention to the notion that he had artistic talent or that he could live life in touch with the concept that he himself was a spiritual being until a stint in Manitoba's medium security Stony Mountain Institution.

In jail he was mentored by Terry Southwind, another inmate who encouraged him to paint.

But in effect Patrick Ross is a self taught artist whose unique technique has evolved in a way that allows him to express emotion and a sense of serenity with the application of white paint on a black canvas.

On his release Patrick became involved with a number of young First Nation ’s artists who gathered for support and instruction at The Graffiti Gallery in Winnipeg, Manitoba.

He had his first exhibition at The Graffiti and through those connections had the chance to collaborate with filmmaker Ervin Chartrand to produce ‘First Stories’ a film made in conjunction with The National Film Board of Canada. In the short film Mr. Ross is shown in the act of creating one of his paintings while he talks about his art, his time in prison and his prospects for the future.

As a result Patrick’s work can be found in collections around the world. Ex- Canadian Governor General Michaelle Jean and past Grand Chief Phil Fontaine display his art in their private collections.