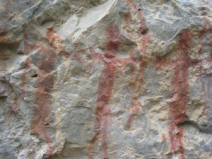 Examples of prehistoric rock art are found across North America, but the end of the prehistoric period varies from region to region across the continent.

For example in Canada, the first contact with the French explorers in the Maritimes and along the St. Lawrence River took place in the 16th century, but Europeans didn't meet up with the First Nations people living on the west coast until late in the 18th century.

Climatic and geographic conditions don't allow for the survival of artworks made from perishable materials like wood, fibre or hide, and as a result much prehistoric art has been lost. A major exception has been rock art...paintings in red ochre or carvings incised upon natural rock surfaces.

There are several exceptional occurrences of prehistoric sites in Canada.

The Marpole culture which existed from approximately 500BC to 500 AD along the Fraser River delta and the surrounding Gulf Islands produced a plentiful variety of stone and bone carvings in the shape of ceremonial bowls, effigies and utensils that are distinct forerunners of the style and iconography of historic west coast native art.

On the Prairies and across the Laurentian Shield there are thousands of sites where petroglyphs and pictographs can be found....especially near the junctions of rivers where people have been meeting for thousands of years.

I paint memories of growing up in the bush north of Lake Superior seventy years ago.