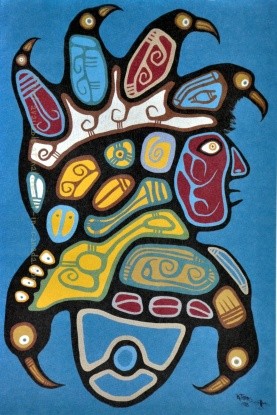 The Ojibwa artist Roy Thomas was born in 1949 on a trap line nearby Caramat and grew up on the Longlac Reserve at Pacquashun, Ontario.

He was raised by his grandparents who taught him how to be Anishnabe (a good being) through stories that taught him to honour and respect the world around him because it is alive with the spirit of the Creator.

It was his grandmother especially who encouraged him to draw. Images came to mind as he listened to her tales, so he drew them in the dirt or the snow. As he grew older he became frustrated with drawings that washed away or disappeared with a big gust of wind, but his grandmother assured him, “The stories and drawings are never gone, someday they will all come back to you”.

Eventually the stick was replaced with a pencil and then brushes. To acknowledge her contribution to his life and her continued presence in his mind, Roy Thomas signed his paintings with a small crow, the name she gave him.

Of himself he said, "I was born an Anishnabe artist. I am a painter in the Ojibway Woodland style. This style uses symbolisms and imagery inspired by the pictographs that I saw as a child. The spirits of the art and my elders have taught me what to paint through visions. These visions compliment the strengths, values and traditions of my people, my family, my community and my nation. Through my artwork, I paint these visions of teachings so that they can be shared with others."

As a teenager Roy worked a series of menial jobs and struggled with alcohol. When he turned to painting full time he found success almost immediately. Painting became a lifelong passion and gave him such a sense of purpose that he was able to overcome his addictive behaviors.

At his death, a newspaper article reported that his wife of nineteen years, Louise Thomas, remembered the gleeful excitement he showed every time he started to paint, with Rolling Stones or Bob Marley music blaring from his studio.

“He was so overwhelmed and excited,” she said. “It was so nice to see him when he was mixing colours. Colours made him really excited.

“When he started to paint the colours on he was so absorbed with it, you’d have to pull him away.”

“He was actually doing sketches up to five to six days before he died, in the hospital,” said Jim Steven, who worked with the artist on his autobiography, The Spirit of Ahnishnabae Art.

Roy Thomas, though primarily a self-taught artist, was influenced by Norval Morrisseau, Daphne Odjig and Carl Ray, all of whom were the pioneers of the Woodland School of Art.

Roy’s strength lay in his design ability and his bold use of line and color. He had numerous one-man exhibitions and participated in several group shows around the world. His work is represented in major Aboriginal Art Collections across Canada and in the US, Europe and Japan.

Roy Thomas' work can be found at The Ahnisnabae Gallery in Thunder Bay, Ontario.