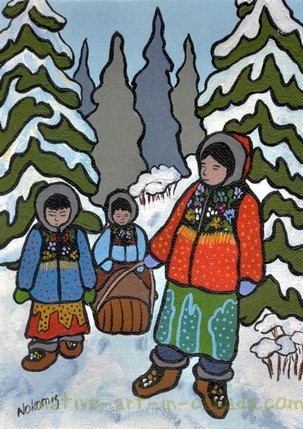 Here I am, in a snit and I want to tell you about it.

When it was time for me to start school my Dad finally moved us close to town. But his idea of close and my idea of close were profoundly different.

My Dad's idea of close was that if he could walk to town in an hour then that was close enough. But that was HIS legs in the summer...not MY legs in the winter and I was the only one doing the walking.

Much of the winter he spent on the trapline which was miles and miles away and my mother had to stay home with me and my younger brother.

Which brings me to the issue that I'm complaining about in this picture.

I walked back and forth to school every day by myself. Although I thought nothing of it at the time, looking back I realize it must have been at least two miles through the bush, maybe more because I'm sure Dad could move faster than two miles an hour!

I remember too that our cabin door opened towards the inside and that was because after a heavy snowfall we'd have been shut in otherwise. In the winter I recall dressing for school and taking my snowshoes off the wall beside the door. When I opened the door after a blizzard sometimes the snow was eyeball high and Mom and I would dig a bit of a path so that I could slip on the snowshoes and leave for school.

Anyway, enough of the drama.

I painted this image just to get even. On this particular day I had hoofed it to school by myself and didn't even need snowshoes. Later that day, it seems that my Mom realized that she needed some supplies from the store. So, in the afternoon, she came into town with my three year old brother and the toboggan.

I was really happy to see her waiting for me when school finished.

But... she wouldn't let me on the toboggan with my little brother. She said that I was a big girl and had to walk home by myself.

I probably wouldn't remember that day except that all the way home my brother sat behind her with a big smirk on his face!

I'm still in a snit!

But now that you and many other people in the world know how unjustly I was treated,  I'm starting to feel better!