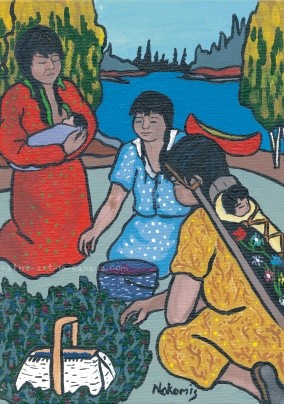 Picking berries was an important activity for the women of my mother's generation. Not only were the berries nutritious and tasty they were a source of income.

Years ago there were few opportunities for women to make their own money...even if they lived in town and even if they were "white" women.

We weren't poor. My father made a good living selling furs in the winter, shepherding tourists to the best fishing spots in the summer and guiding hunters through the bush in the Fall. But along with his money came expectations, if not outright verbal suggestions, as to how that money should be spent!

With my mother he didn't get very far down that path...she was a strong woman who not only knew her own mind.  She had a strong sense of self worth, but there were some women we knew who had no money at all. If their husbands handed them a dime and sent them to the store to buy bread the expectation was that there'd be a nickel change when they returned home.

So picking berries was a money making activity -  a cash crop...strawberries first, then raspberries and finally, in August, the blueberries. We'd get as much money for a cup of tiny wild strawberries as we did for a full basket of blueberries or raspberries but that was because they were harder to find...and they were soooooo tasty that they were really easy to sell.

Berry money was like egg money for farm women in the mainstream culture... theirs to spend as they please but berry money had an added perk in that it was a fun communal activity.

Picking berries really was lots of fun. We 'ladies' would pick all morning then sell our crop in the afternoon. Of course when my family lived far out in the bush we only picked for ourselves, but when I started school and we moved close to town there were lots of places to sell berries. I got to keep any money I made. Actually "keep" is a relative term because it was gone moments after I entered the store!

Sometimes we sat outside the general store with our baskets and sometimes we knocked on doors. But the very best place was the station when the passenger trains stopped to fill the steam engine up with water. It was always a half hour stop so travelers would get off to stretch their legs. At the time it took between six and seven days to cross the country so bored passengers were like money in the bank...except we didn't have a bank which, of course, was why i had to "deposit" my money at the store.

If you want to leave the berry picking business to others and go home well fine, but otherwise here's some more of my stories.