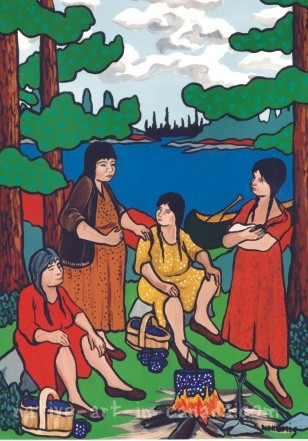 Can't you tell that babies, pregnancy and imminent birth will dominate the chatter among these ladies?

When I was a girl childbirth was a common topic of conversation among women of all ages...and girl children of any age weren't left out of the loop. If there were no female children boys had to learn the ropes instead. Children learned about childbirth from an early age just in case they were the only ones on hand to help out...not uncommon two hundred miles north of Lake Superior!

Doctor's weren't at hand and advice from an experienced woman was always appreciated. In this picture, if she's lucky, the grey-haired elder will handle the delivery - her years of experience most welcome.

But any of the women could lend a hand because even as children they would have been trained to help.

I was only five years old when I first 'participated' in a birth.

I carefully chose the word participate. Children didn't get to help with the birth until they got over the Aaaaagh!!! kind of reaction. That could happen when they were seven or seventeen - and the adults wouldn't expect much of them until they recognized that a young person was finally ready for hands-on training.

In the meantime children sat quietly in the cabin or the tent or under the tree during the entire labour. Both the midwife and the labouring mother explained what was happening.

Birthing became a natural part of life. . . and so did death.