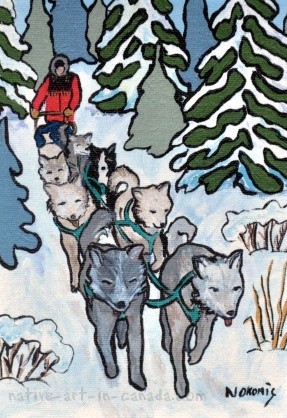 If the dogs are on the trail you'll know this isn't a picture of my father.

Unlike my Mom he hadn't been raised with dogs and didn't know how to get them to do what he wanted.

The thing is that dogs, when left to their own devices run in packs. There's always a leader of the pack and in our dogs' minds the leader wasn't my father...much to his chagrin.

If this was my father behind the team I'd have painted an entirely different picture. If Dad was driving the team, by now the lead dog would deliberately have taken the team off the trail and they'd all be tangled up...fighting to the death. I'd have had to paint lots of blood and gore on the bushes and write many bad words coming out from behind the trees.

No, this is not a picture of my father.

This is my mother going to town for supplies. She could even manage to control the dogs when they were hitched side by side and running through the trees.

The lead dog, when hitched to the sled by itself, on a single command from my mother would take me to school, let me jump off and then go home all by herself.

It was just my Dad that she was determined not to listen to. Leave him cursing on the trail and go home or read on . . .