The Dentist's Office was on a Train and I Went by Canoe! 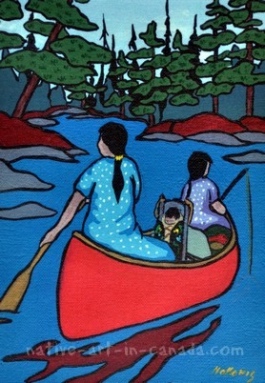 Many years ago, it wasn't an easy thing to visit a dentist if you lived in a remote part of Canada.

I lived in a part of the bush that had no roads and no stores. But in 1939 the Ontario government set up a mobile dental service in a railway car that was pulled from town to town in the northwestern part of the province. It served those railroad communities that weren't connected to the road system.

The dentist lived with his family in the front of the car, schooling his children with correspondence lessons. But the back end  had been converted to a complete, albeit tiny, dentist's office. It had a chair, a drill, and all the little weapons neatly arranged in drawers. The dental car was dropped off at various towns along the tracks and the word would go out that the dentist was in town.

My mother had never been to a dentist, but someone told her that this man was like "a doctor for the teeth" and that it was GOOD to take children to see him. She was a good mom so naturally I had to go to the dentist.

I wasn't yet going to school which meant that my Dad was still sticking to his rule about not living too close to a town. His idea was that if he or Mom could paddle to the village in a single day that was close enough.

I mention this because we lived about twenty five miles north of the railway tracks along a canoe route that followed the shores of three small lakes. There was no current to speak of - the lakes were connected by narrow channels.

In the years since I've been telling this story I've only met three men nowadays who could paddle that distance by themselves in a single day. Two men paddling together have a chance, but it's a challenge for a single paddler.

But times were different then. We grew up in those canoes. Though it was hard work, Mom could make it to town before dark, all on her own and even with me in the canoe.

But this dentist trip took twice as long as normal.

It took a full two days of paddling to get to the railway tracks and they were loooooong summer days.  The paddle dipped into the water at the first crack of dawn.

Each evening before we made camp I dropped a short line into the water and caught a fish for supper. It was easy to do in those times...sometimes I didn't even have to use bait! As soon as I caught something Mom would head to shore so that she could start a fire and rest from her hard days work. 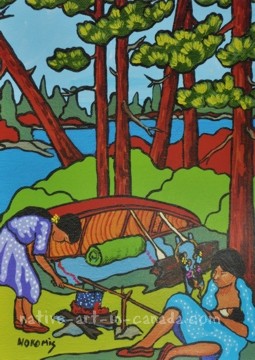 It was my job to do the cooking. My one and only recipe at that age was fish soup. I half filled the pot with water, Mom set a fire and hung the pot over the flame.  My technique was to gut the fish with my four inch jack-knife, drop it into the water and add the white stock of some bulrush which I hacked apart with my little blade.

At night Mom propped the canoe on it's side, draped a canvas tarpaulin over it and we crawled underneath.

At dawn, Mom made tea and a small bannock. Then we got into the canoe and continued on our way.

When we finally reached town and saw the dentist it turned out that neither my mother nor I had anything wrong with our teeth.

The trip had been for nothing.

So we picked up a few supplies from the store and paddled home. But again, it took another two days instead of one.

The reason it took so long was that my brother had been born the day before we left!   He was thirteen hours old when we'd launched at dawn that first morning.  We had to stop several times a day so Mom could feed him.  While she was doing that I gathered fresh moss for the tikinogan.  Moss was our version of a disposable diaper.

I was never able to acknowledge Mom for the strength, the endurance and the love that went into that dentist trip.  Not in a way that she could hear.

In her own mind she'd been taking her time...two days instead of one so what the heck was I blathering about?  Once when I was going on and on about the newborn baby, her stamina and her determination to just keep paddling she actually yelled at me, "What the !#*! did you think I was going to do?  Walk?"

Her attitude was supported by all her friends and family members who could have done the same thing.

For example, the woman who had come to our camp to help my Mom deliver the baby had traveled in her canoe for a day, but a further distance. You wouldn't have been able to have a sensible conversation about canoes with her either...she had three children with her and one of them was a two year old!

Canada missed a great Olympic opportunity at the time.  If they'd sent the women of my mother's generation to the Games we'd have brought home the gold, the silver and the bronze!

Over the years I could NEVER win an argument with my mother. Just about the time I nailed her to the wall with my superior mind, brilliant ideas supported by years and years of advanced education she'd glare at me, slap her hand on the table, raise it backup, point her finger at me and say through gritted teeth. . .

"You're kids teeth would rot in their mouth before YOU got them to the dentist in a canoe."

She was right.  And I guess she heard me after all.